On Ken P. D. Snydecast #163: Holiday Shebangery the boys talk a lot about video games in Walt Disney theme parks.
Dana laments that they haven't just made a video game where you walk around Disneyland.


Since then, XBOX has: 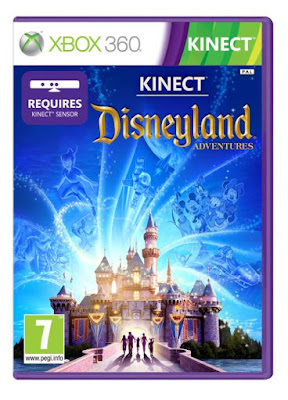 The Disneyland Adventures game for the XBOX360 Kinect is about the closest thing to actually being there. 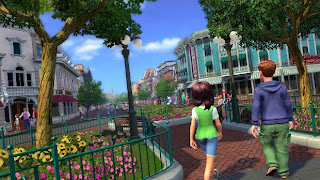 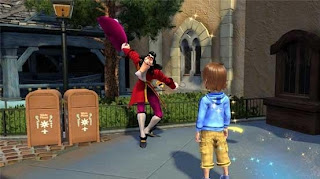 Basically every square inch of the Anaheim Disneyland park has been created in a virtual world. You can walk by and see the buildings, trash cans, restaurants and ride facades. It's a pretty remarkable recreation.

Take a look at these videos just showing a walk around of some of the different lands:

The downside to the realism is that you can't just hop on and pretend to ride most of the attractions.
Some of them, like King Arthur's Carousel and Astro Orbiter do work that way, but most of the rides represented in the game are "based on" the original ride and play more like a goofy kids game than an actual ride on, say Haunted Mansion.
The attractions that appear as playable games are:

Here is a look at the game play of the Haunted Mansion:

The Kinect is sorta like the Wii only the XBOX can see and hear you, so you don't hold a controller. I find the  controls far more responsive than the Wii too.
I also find that I would rather sit on the couch and hold a controller... but that's my problem.
Basically when you stand in front of your XBOX and move your leg, your character moves his leg in the same fashion.
You can't flip off Mickey Mouse in the game, however, I tried. It doesn't let you.
But you can hug Cinderella too... but you can't touch her there... or there... or there...
Oh well.
Posted by Guy Hutchinson at 9:11 AM