Here's a couple sentences from wikipedia that don't really seem to make sense:
In the late 1970s and early 1980s, as well as the late 90s to early 2000s, a Gatorade brand of chewing gum called Gator Gum was produced. The product, manufactured by Fleer Corporation, was available in both of Gatorade's original flavors (lemon-lime and orange). In the late 1970s, Stokely-Van Camp (owner of Gatorade before 1983) negotiated a long-term licensing deal with Swell and Vicks to market Gator Gum. The gum was discontinued in 1989 after the contract expired.[17][18] 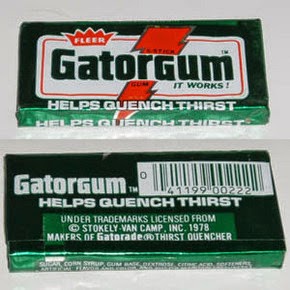 As mentioned on the show, Quench Gum is available in a tub on Amazon.com: http://www.amazon.com/Quench-Gum-Tub-O-Quench-Ounce-Pack/dp/B001IEXQSU/ref=cm_cr_pr_product_top?ie=UTF8 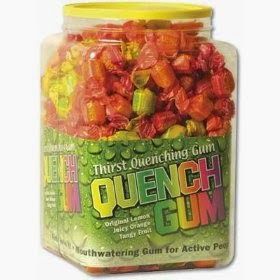 Here are some reviews from Amazon:

Here are some reviews from Amazon FOR Quench Gum: