The Marx Brothers, Why A Duck? 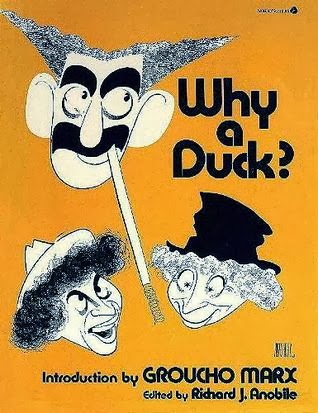 Here's some background from wiki:

Why a Duck? is a comedy routine featured in the Marx Brothers movie The Cocoanuts (1929). In a scene in which Groucho and Chico are discussing a map, Groucho mentions the presence of a viaduct between the mainland and a peninsula. Chico, who is playing the role of an immigrant with poor English skills, replies "Why a duck?" This leads into a long schtick with Chico responding "Why a no chicken?", "I catch ona why a horse", and so forth.
Why a Duck? is a touchstone scene for Marx Brothers fans, as evidenced by a book of the same name (featuring a foreword by Groucho) which focuses on the minutiae of the Marx Brothers' routines.
The duck is a recurring reference throughout the Marx's and especially Groucho's career. His signature walk was called "the duck walk" and on Groucho's television program You Bet Your Life a stuffed duck made up to resemble Groucho would drop from the ceiling to give contestants money if they said the day's secret word. Ducks are the only animals that perform lines in the song "Everyone says I Love You" in the Marx Brother's fourth film Horse Feathers. Their fifth film was called Duck Soup.

Go to http://www.marx-brothers.org/whyaduck/info/movies/scenes/whyaduck.htm, for the full dialog with audio clips!

Or watch the video here:

Posted by Guy Hutchinson at 7:47 AM