From wiki:
Nachos originated in the city of Piedras Negras, Coahuila, Mexico, just over the border from Eagle Pass, Texas.[3][4] In 1943, the wives of U.S. soldiers stationed at Fort Duncan in nearby Eagle Pass were in Piedras Negras on a shopping trip, and arrived at the restaurant after it had already closed for the day. The maître d'hôtel, Ignacio "Nacho" Anaya, invented a new snack for them with what little he had available in the kitchen: tortillas and cheese. Anaya cut the tortillas into triangles, fried them, added shredded cheddar cheese, quickly heated them, added sliced pickled jalapeño peppers,[Note 1] and served them. 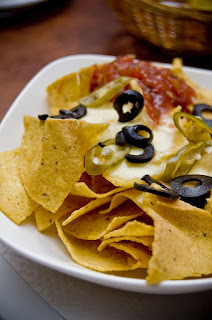 Posted by Guy Hutchinson at 5:47 AM