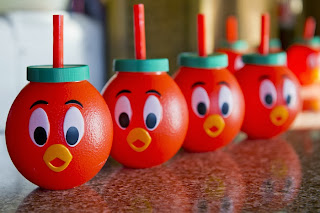 From the Disney Wiki:
The Orange Bird was created in 1970 as a mascot for the Florida Citrus Commission in exchange for them sponsoring the Tropical Serenade attraction in the Magic Kingdom.
Accompanied by singer Anita Bryant, the two appeared in ads for Florida oranges and Bryant narrated a record album telling the character's story. Eventually, the bird would fade into obscurity when Disney and the FCC severed their ties in 1987.
Years later, at Tokyo Disneyland in 2004, the Orange Bird would experience a revival as the Japanese became infatuated with the character and the character received a lot of merchandising to coincide with Japan's annual Orange Day on April 14. The Orange Bird has since returned in merchandising to Walt Disney World in time for the 40th anniversary of the resort and the character. Eventually, on April 17, 2012, the Orange Bird made a proper return to the Sunshine Tree Terrace.

Here is the full story... with Anita Bryant:
Posted by Guy Hutchinson at 8:25 AM