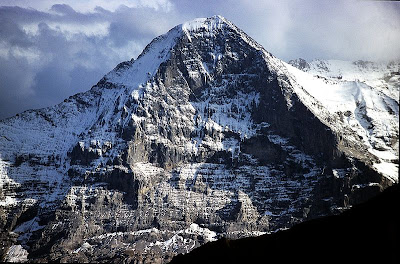 FROM WIKI:
The Eiger (3,970 m (13,025 ft)) is a mountain in the Bernese Alps in Switzerland. It is the easternmost peak of a ridge crest that extends across the Mönch to the Jungfrau at 4,158 m. The northern side of the mountain rises about 3,000 m (9,800 ft) above Grindelwald and other inhabited valleys of the Bernese Oberland, and the southern side faces the deeply glaciated region of the Jungfrau-Aletsch, covered by some of the largest glaciers in the Alps.
The three mountains of the ridge are commonly referred to as the Virgin (German: Jungfrau - translates to "virgin" or "maiden"), the Monk (Mönch) and the Ogre (Eiger). The name has been linked to the Latin term acer, meaning "sharp" or "pointed," but more commonly to the German eigen, meaning "own".

The Clint Eastwood action film The Eiger Sanction uses the mountain as it's setting. 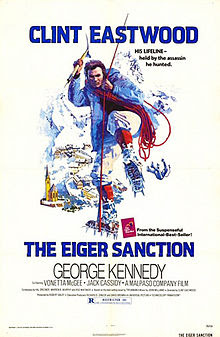 Here's some video for you! The 1975 trailer for the film:

Here is a 1 hour documentary on the mountain called Eiger: Wall of Death.

I suppose The Mountain That Dripped Blood was taken.