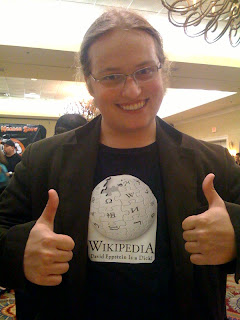 I'll take one! Large, and if it comes in blue or red that would be fabulous :)

I would love to own this shirt. It would make all my Ken P. D.reams come true (inspirational voice optional).

Here's a nerdy question. Silkscreen? Or iron on? Also, I didn't think David Eppstein's dicektry was even a question

I'll take one too! You gotta distribute that masterpiece

A digital t-shirt. Truly the wave of the future. Now I feel even stupider considering I thought the exclamation point was a question mark.

It would be a nice shirt to wear to computer science class at UCI.

Hey, check out the professors John Lithgow impression on his LiveJournal page, OxDE. And hes using that oh so clever Binary that Wall-E likes so much. http://11011110.livejournal.com/

I've got to say, after going to Eppstein's live journal and reading it, he doesn't seem that much of a dick. Granted, he's a dick in regards to Wikipedia. Perhaps the shirt could be.

Or maybe it's just a facade and he is in fact a total dick.

Eppstein has to live with the fact that when it comes to wikipedia; he should not be gauging popular culture relevance pages. He is a computer science nerd.

Here's a little math for him:
Pretentious + ignorance = dick
(the shirt fits; wear it)