Alright, I am sure you are all up in arms about Ken's tweet about the demise of the podcast.

Or maybe you're not. It wouldn't really be too drastic a change. They only put out 2 shows since last February.

So, essentially, it's 2 less Snydecasts a year if they stop.

But are they stopping? Let's read way to much into every sentence in the tweet: 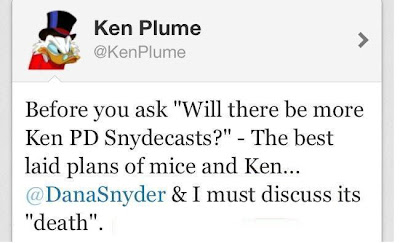 The first thing you notice is the phrase "before you ask". I have circled it in red in case you cannot read in English: 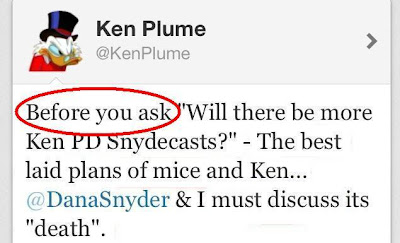 Before you ask! Ken is acknowledging the fan base. He is pointing out the demand for more Snydecasts. He knows it's there! This isn't entirely important, but I had already circled it and uploaded the image. 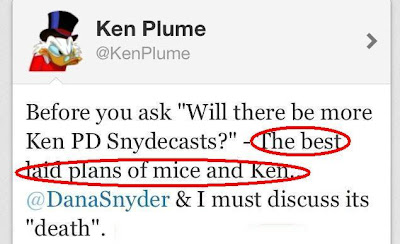 The best laid mice? Wait, I think he's talking about the great novel Of Mice and Men! I love that book! 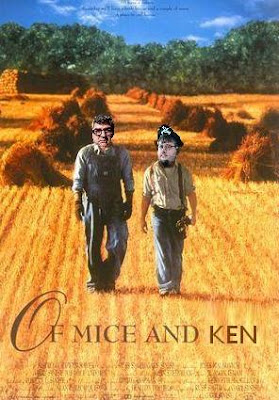 OK, maybe I never read the book, but I saw the movie.

So, let's see Dana played too rough with a rabbit and now KEN HAS TO TAKE HIM OUT! 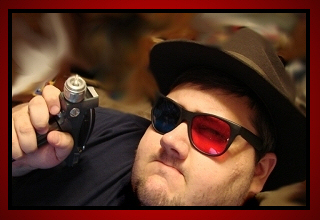 Wait, maybe it means something else.

It's a quote from Bob Burns! I love him: 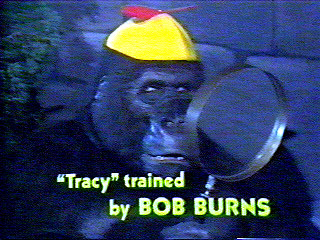 Anyway, the quote means that if something was planned... wait a minute... they never PLAN anything on the Snydecast! 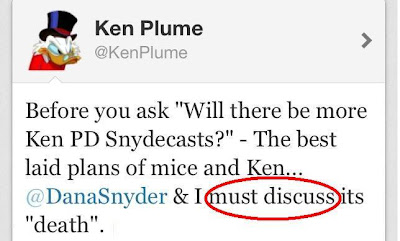 Discuss? I like that! That is something they do on the Snydecast! 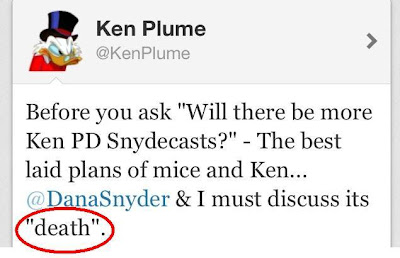 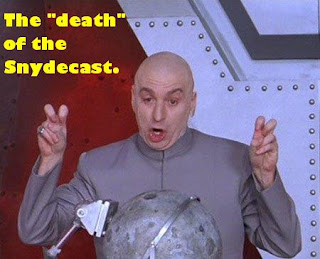 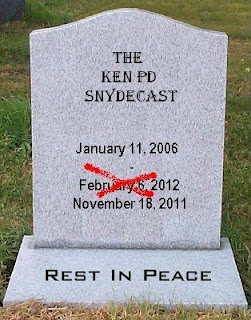 Posted by Guy Hutchinson at 7:32 AM

Is Mommy and Daddy getting a divorce?

I interpreted it differently, Sir Breath of Wieners. I think he is saying that he has tried his best to get the Snydecast going again, though obviously it has not worked out. By "death", he is saying that he, Dana, and the listeners would all acknowledge by summary judgment that the Snydecast is in essence 'deceased'. Yet, being the fearless and valiant Plumey he is, Ken is still going to try to motivate Dana to reignite the fire, perhaps by speaking frankly about the matter or even giving a 'shit or get of the pot' ultimatum.

Just thought I'd give some analysis, being that this blog entry lacked desperately in that regard. On a side note, another very entertaining Experience entry! This is one of my daily browsing bookmarks, because I always enjoy your posts (well that and out of blind, desperate hope that it will be the bi-annual announcement of a forthcoming new Snydecast). If the Snydecast does indeed go the way of the dodo, I hope you will find another outlet to continue your disparate brand of blogging.

Thank you very much for the kind words!

I actually think you hit the nail on the head on all three parts of the tweet.

Dana is now a regular on a whole bunch of shows and performs far more often on stage than he did a few years ago.

I have assumed as long as Ken is in the "posting audio on the internet" business there is always a chance of another Snydecast.

and... check guyhutchinson.com for all your blog reading needs.

Im That Jon-
Yes, they are.
I am not sure which one Plumey is, but he is chatting with other people and I can't take to calling those people "parent".
Its tough on me.

Well Dana always talked very highly of his recent experiences in theater, so I'm sure he is enjoying life as much as ever right now.

By the way, I noticed on your website the slogan, "For all your Guy Hutchinson needs"... kinky.