Dana recently tweeted mention of the death of Lawrence McKiver, the last original member of the McIntosh County Shouters. 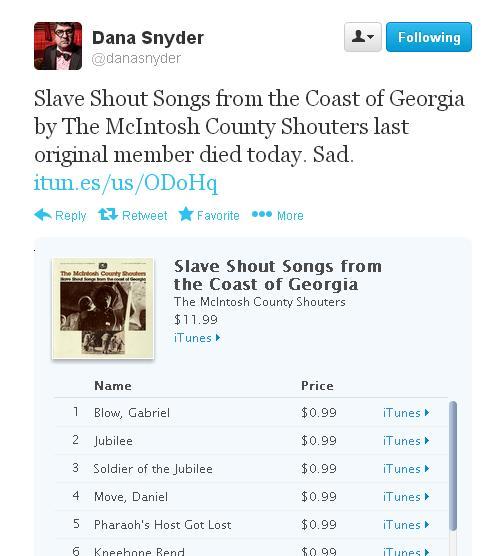 Lawrence McKiver, a founder and the longtime lead singer of the McIntosh County Shouters, a Georgia group representing the last community in America to perform the traditional ring shout — a centuries-old black form of ecstatic worship that marries singing, percussion and movement — died on March 25 on St. Simons Island, Ga. He was 97.

From the NY Times:


The ring shout, rooted in the ritual dances of West Africa and forged by the Atlantic slave trade, is believed to be the oldest surviving African-American performance tradition of any kind. Centered in the Gullah-Geechee region of the coastal South, it differs from traditional black religious music in repertory, style and execution.

“The shouters, historically, had a separate body of songs that were used expressly and exclusively for the ring shout,” Art Rosenbaum, the author of “Shout Because You’re Free” (1998), a book about the tradition, said in an interview on Friday. “They are not the spirituals or gospel songs or hymns or jubilees that you’d hear in the church.”

Mr. McKiver, the Shouters’ last original member, appeared with the group until he was in his mid-80s and was widely acknowledged as the ring shout’s chief custodian.

Here is a wonderful old track from the McIntosh County Shouters:


The group continued after McKiver's retirement and will continue on. Here is a more recent performance: