Back on KEN P.D. SNYDECAST #161: Mail Nag Dana talked about a listener (Jon from Jacksonville, Florida) who had given him the gift of mustard.

DANA: I do believe Jon, who knows who he is, who sent TWO things... one of which, Plumey... he spent $18.50 to have express mailed to Eye Of The Snyder International headquarters.

KEN: And you left it sitting in the mailbox for a few days?

KEN: That's what was in the package.

The podcast goes on and then Dana mentions the other package Jon sent "a humongous box of various fancy mustards."

Dana mentioned that the mustard that looked the best had the seal broken (during shipping) and featured a red cap and a lion on the label.

That mustard was Lowensenf Extra Hot Mustard. The other mustard that had the broken seal was Alstertor Dusseldorf Mustard. Dana assumed that "Dusseldorf" must mean "crazy mustard" and liked the miniature beer stein it came in.

Jon was nice enough to send a picture of these condiments: 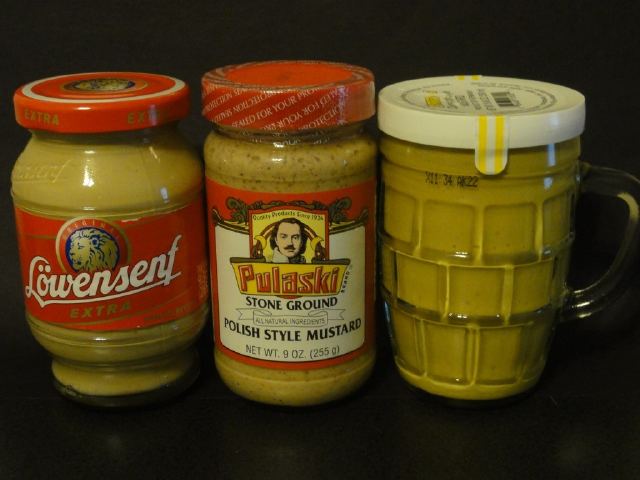 Lowensenf is on the left, Alstertor Dusseldorf on the right and a Pulaski Stone Ground Polish mustard in the middle.
Posted by Guy Hutchinson at 7:14 AM

Sweet! I've been hoping there would be mustard pics.

Did Plumey ever get his ketchup? ;)

Seriously, don't they look amazing! I so want a sandwich right now.